5 Tech Boundaries to Set With Kids As They Grow Up 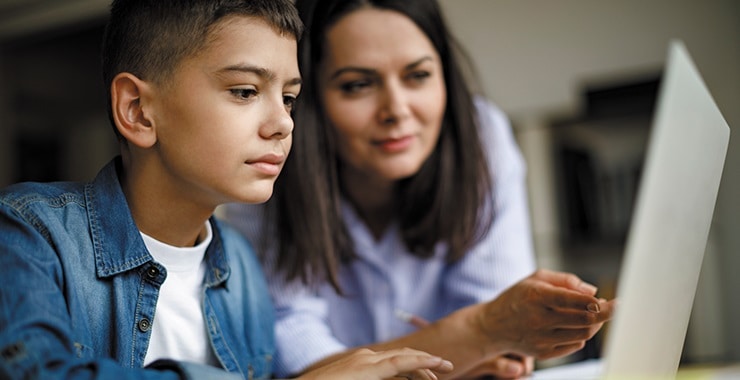 Every day, it seems, there’s a new tool, platform, app, or gadget kids want to try. Not all of them are appropriate for kids. Even those that are shouldn’t be used 24/7, or in locations like the classroom.

Setting guidelines around kids’ technology use is critical. Kids are naturally curious, and they don’t yet understand just how dangerous or addictive certain technologies can be.

What should those boundaries be? As a family, think through:

What Tech Is Allowed

Decide what kinds of tech you’re OK with your kids using. Are you comfortable with general computer use? Is it time for you to get a safe kids phone? What about gaming systems?

Make sure your children know not only which devices are off-limits, but also your reasons for allowing some and not others. Perhaps phones are acceptable because they’re used to stay in touch, but gaming consoles are not because their only purpose is distraction.

Pay particular attention to internet-enabled devices. Social media, in particular, has been shown to harm children’s mental health. If you do let your kids use the internet, stay up to date on the sites they’re using.

If basic monitoring isn’t enough, parental control apps can be used to block sites like Twitter while allowing access to educational ones. As your kids get older, you can unblock them and allow more devices.

As your kids get older, they’ll likely spend more time using technology. Everything from schoolwork to socializing happens in digital spaces, and you don’t want your kids to feel deprived or educationally limited.

Start by understanding how your kids compare to the norm. Centers for Disease Control data shows kids spend nearly as much time on their devices as they do sleeping. The CDC reports children ages 8-10 spend six hours a day in front of a screen, while children ages 11-14 spend nine hours. Neither of these statistics includes screen time while at school.

It’s no question that kids are getting a lot of time with technology. As a parent, it’s up to you to decide how much is too much. When in doubt, ask your kid’s healthcare provider for their opinion.

Whatever you decide, it’s important to set a good example. Abide by your own boundaries: If your kids see you staring at your phone all night, they’re bound to do the same. Adults can suffer consequences from too much screen time, just like kids.

When Tech Can Be Used

Sheer amount of time spent on tech isn’t the only time-based consideration. You’ll also want to set boundaries for the times of day tech use is acceptable.

Perhaps you’d like the whole family to unplug for tech-free dinners. Because using screens before bed can impair sleep, you may want to make tech off limits after 8 p.m. Car rides could be an important bonding time you’d prefer to protect.

Another time to set tech use restrictions is during the school day. Default to your school’s rules. If cell phones aren’t allowed whatsoever during the school day, ask your kid to abide by that. If they’re allowed to use their phone at lunch times but must stow it in their locker during classes, then you shouldn’t be getting texts at all hours of the day.

Again, this may change as your kids get older. Maybe they can complete their homework up to fifth grade without computer access, but they’ll need it in the evenings once they begin being assigned essays. Check in with your child to ensure they’re getting the right balance of tech for school, tech for fun, and tech-free time.

Where Tech Can Be Used

Not long ago, the question of where your kids could use technology wouldn’t even come up because desktop computers weren’t mobile. But now, people carry technology on their wrists, in their pockets, and in their cars.

You’re likely to meet resistance on this, but establish tech-free zones at home. These can be relatively small places, like the dining room table or larger ones like the family room.

Removing the temptation of technology from certain areas will help your kids learn to find balance. Limiting it to certain spaces will also make it easier for you to monitor your kids’ technology use and intervene if it gets out of hand.

Just because tech is everywhere doesn’t mean it needs to take over your kids’ lives. By setting clear boundaries, you encourage them to explore and engage with the real world.

Even the most well-behaved kids push boundaries. Before it becomes an issue, decide how you’ll handle violations of what, when, and how tech should be used.

Realize that not all violations are created equal. If your son or daughter is on her phone five minutes after it’s time to put the device down, a verbal warning may be plenty. But if you discover repeat violations of the school’s cell phone policy, then temporary loss of the device may be in order.

On the flip side, decide how you’ll reward your kid for following the rules you set. If your child consistently puts her device down before dinner, perhaps she earns some extra tech time in the evening. It’s important to encourage behaviors like speaking up if they see a friend being bullied in a group message.

The system you set is up to you. But if you have multiple kids, be consistent. Children won’t respect the rules if they perceive they’re applied unfairly. For serious infractions or rewards like a new laptop, talk through what behavior led to the consequence or reward.

We live in a digital world, and kids need to know how to use technology safely and effectively. Boundaries teach them how to do that, so don’t feel like the bad guy. Once they’re old enough to make responsible tech choices themselves, they’ll thank you.

How to Clear Cache in Google Chrome Browser?

Smart Security Technology For Your Home

Why Artificial Intelligence Will Shake Up the World...