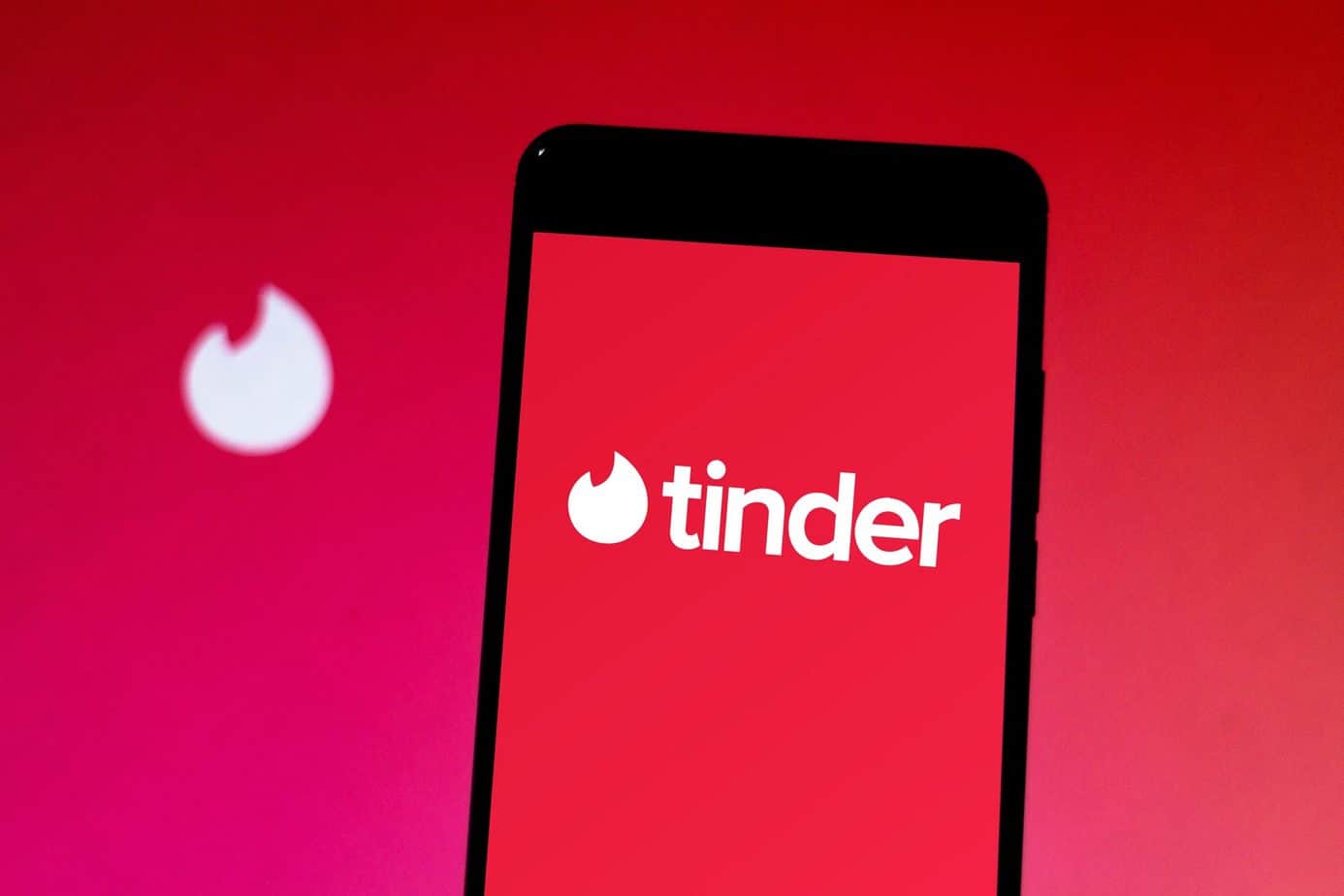 When you think about dating apps, Tinder is probably the first name that comes to mind. This application is insanely popular all across the world. As per the newest statistics (late 2017), Tinder boasts of over 57 million users around the globe and registers over 1.6 billion swipes every day. Using this independent research, we assume that it has crossed 74 million active users mark by now.

This also helps that the app is available in 190 countries across the world, and is available in 40 languages. Though, Tinder isn’t the only dating app out there. Depending on your choices, you might find that a different application is more suited to your needs. Thus, if you are looking for Alternative Online Dating Apps that can help you find that special someone, or even if you are just looking to meet new people and make new connections, 12 applications like Tinder for Android and iOS can use 2020. 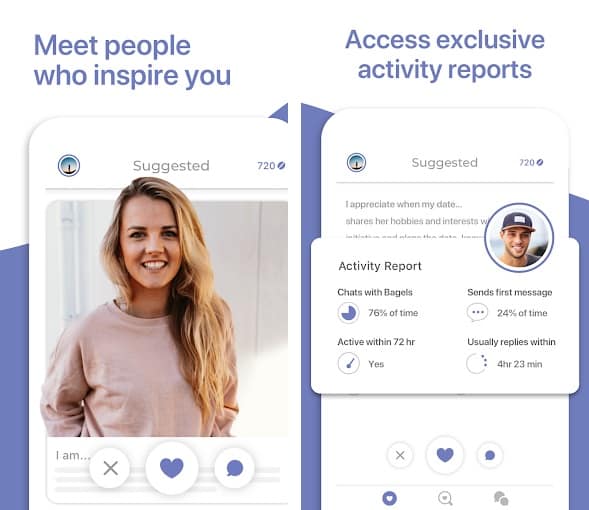 Coffee Meets Bagel is a dating service that has come up with one of the freshest dating ideas in the online dating world that I have seen in a while. The dating service gives the woman more power by taking away the guessing game, which comes with Tinder. So, Women only receive suggestions from those guys who have already shown an interest in them. It works because every noon, and guys will receive up to 22 quality matches known as “Bagels.”

The people have the option to like or pass on the matches. Then the service takes all the person who has expressed their interest and curate the best potential matches for women. Hence, women are receiving high-quality events from men who are already interested in them. Well, The best part about using this service is that you welcome highly-curated suggestions for you once in a day, so you don’t waste Time swiping away like on Tinder. 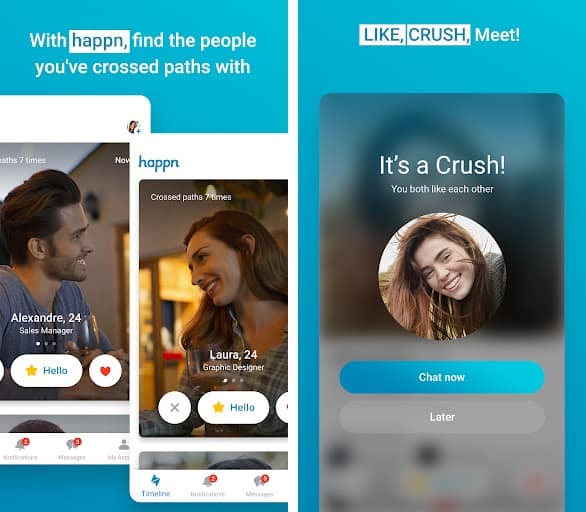 Happn happens to take a different approach to date. This service’s tagline reads, “Find the people you have crossed path with” It allows you to do that. Well, Happn combines the power of social media with your location to show people who are around you. If you cross paths with another Happn member in real life, their profile shows up on your timeline. This application evens shows you the number of times you have crossed paths with the same person, which might not be that useful though undoubtedly exciting to see.

Once people show up on your Happn’s application, you can either like or dislike them just as you do on Tinder. Whether the same person likes you back, you get connected and can chat with each other. The Happn also has a feature called Crush, which is similar to Super like on Tinder and lets the other person know that you like them. However, Charms are based on your credits earned by buying or inviting friends to the application. Features wise, Happn is very similar to Tinder. Though, its unique feature of showing people you have just crossed paths with is undoubtedly impressive, intriguing, and worth giving. 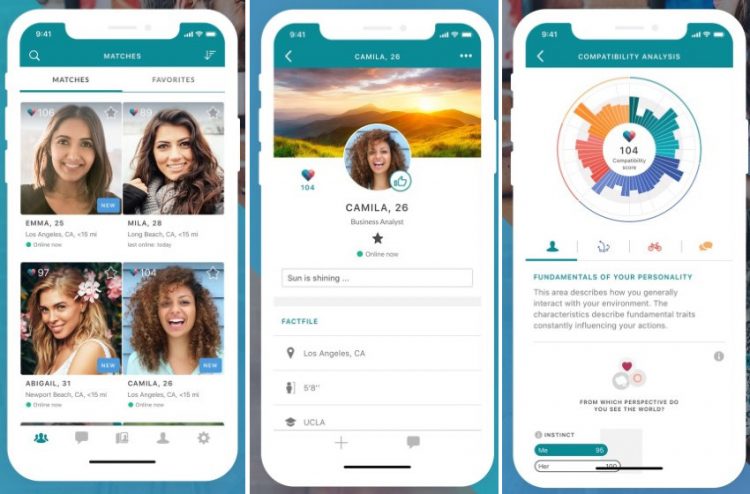 eHarmony prides itself as the Third service within the online dating industry to use a scientific approach to matching highly compatible singles. Now According to their site, the service uses its propriety Compatibility Matching System technology to match single women & men based on 28 dimensions of adaptability for lasting and fulfilling relationships.

So, What this means for you as a user is that you can be sure that the matches shown by the service consist only of those who are highly compatible with you, you have a higher chance of making a date work. Hence, eHarmony is for people who are tired of going on dates and finding that the other person is nothing like them. Whether you are looking for auspicious dates and long and fulfilling relationships, do give this service a try. 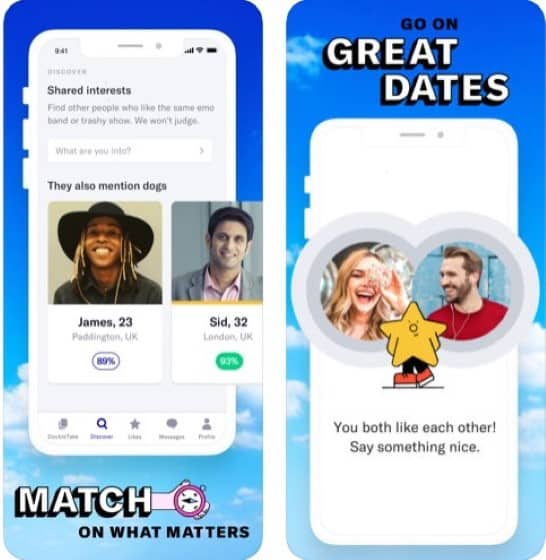 The OkCupid markets itself as a dating platform that doesn’t only focus on your looks. When you visit the service’s official site, it reads, “You are more than just a photo.” OkCupid’s idea is to offer you more refined dates based on your interests and passions. Hence, you can weed out prospective matches based on the things you dislike. This OkCupid takes most of the guessing out of the dating process before you are matched. The only thing that might not sit right with people when it comes to using OkCupid is that most of its features are hidden behind a paywall. This said, if you want your dates to be decided based on your preferences and not just looks, OkCupid is undoubtedly the application. 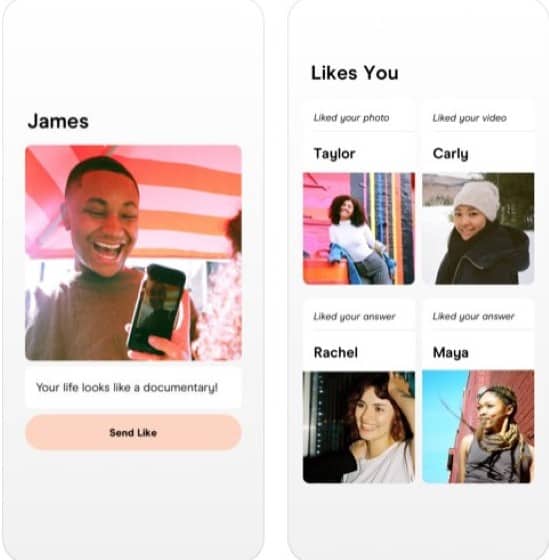 Back when Hinge was released, its main aim was to match you with friends of your friends. Though, the application has since changed its stance on online Dating and has taken a smarter approach to match two people. This application now has a timeline-Esque profile page with like buttons on every separate element on a user’s profile.

This enables people to like precisely what they, Anyways, like about the other person. This provides the other person enough information about what you want about their profile, leading up to a more natural and fluid first conversation. Try out Hinge if you are sick of Tinder’s ambiguous nature and want a dating application that gives you more control over your likes. 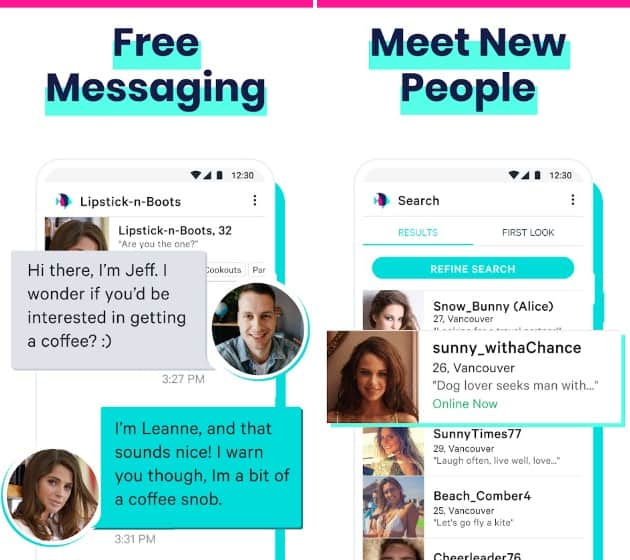 This Plenty of Fish is for people who like Tinder but want to use it for free. This application provides most of its features for free, allowing users to send unlimited messages, check unlimited profiles, and more. This also hosts one of the largest dating communities globally, with its member’s list reaching more than 155 million. This is more than double of what you can find on Tinder.

This said, with quality, quantity suffers. There are numerous fake profiles and frustrated men in this service, which makes it harder for a woman to find a good match. The application is currently available only in select countries that include Canada, the United Kingdom, Australia, Ireland, New Zealand, Spain, France, United States, Germany, and Italy, among others. 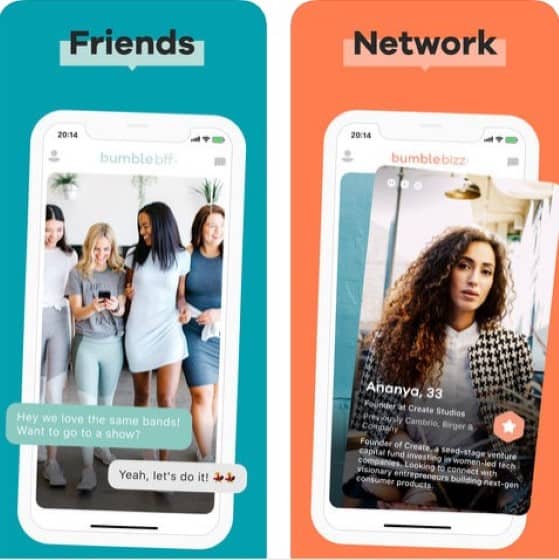 Whether you are a lady and tired of receiving obscene messages on all the dating apps that you have tried, Bumble is for you. Bumble is very like Tinder with one fundamental difference. So, The difference is the fact that the service only allows a woman to start a conversation. Well, The first step is similar to Tinder, as in the application shows you the profile of your prospective matches, and you can like or dislike them. One Time both people like each other, they can start the conversation.

Though wait, if you are a guy, you are not in luck as only the women have the power to start the conversation. That approach has benefits for both men and women. Firstly, women don’t have to go through terrible pick-up lines every Time there’s a match, and for men, well if a woman starts the conversation, it means she is really into you, and all you need to do is not ruin this up. Furthermore, the application has dedicated sections for people looking to date, networking, and making friends, which is a nice touch. 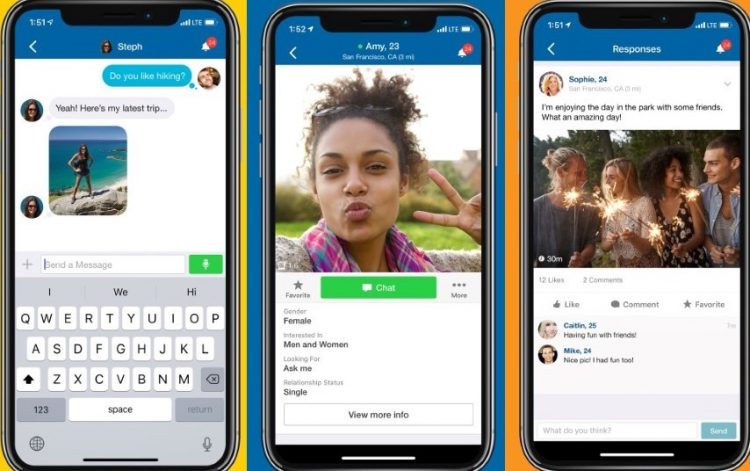 Skout is an application that focuses on both Dating and friendship. You can select to date people near you and connect with them or connect with people who reside in other countries or even continents to talk to them and make friends. The application functions as Tinder, enabling you to like and dislike people. One Time both persons like each other, they are matched and can chat with each other. The only significant difference between Skout and Tinder is that the application wants you to focus more on value-filled relationships than an endless parade of dates.

Recently, Skout has added a new Live Broadcasting feature to broadcast yourself live or join in on a live-stream hosted by another person to share experiences with the broader community on Skout. It’s a pretty exciting feature for an application focused on Dating and making new connections. 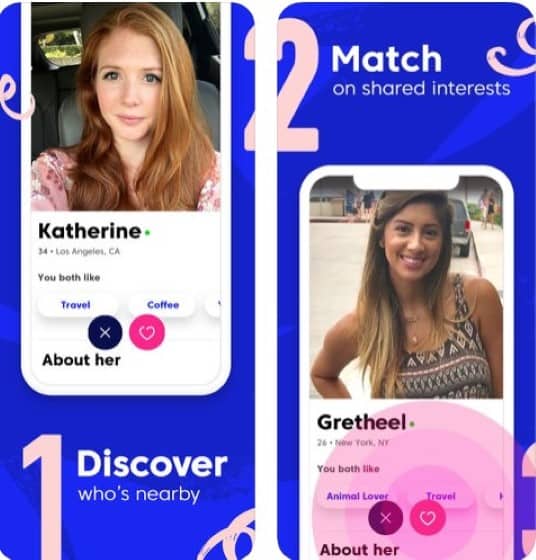 The Match.com has long been a trusted dating application, and thus, it deserves to have a special mention on this list. While before the days of Tinder, Match.com has been acting as a bridge for couples to meet online. The best part of this application is its durable filters that filter out people based on your preferences. That enables you to match people with compatible personalities. Match.com prides itself on providing an experience that results in a real relationship, and if that’s what you are looking for, there is no greater place to find your soulmate online. 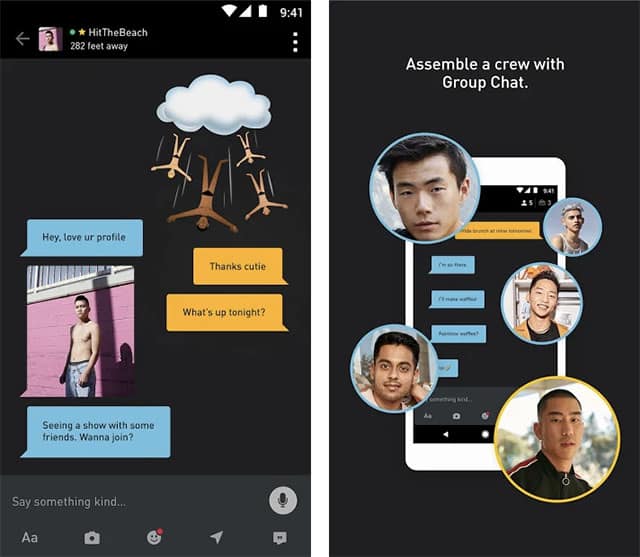 Grindr is a dating service that is exactly like Tinder but for gay, bi, trans, and queer people. While launching in 2009, Grindr has quickly grown into the world’s greatest social networking app for gay, bi, trans, and queer people. So, Dating is harsh as it is, but it is especially hard for people who are not straight as there is no way to know that the people they fancy have the same sexual preferences or not. This Grindr takes out the guessing part from the world of gay, trans, bi, and queer Dating, allowing them to find like-minded people. 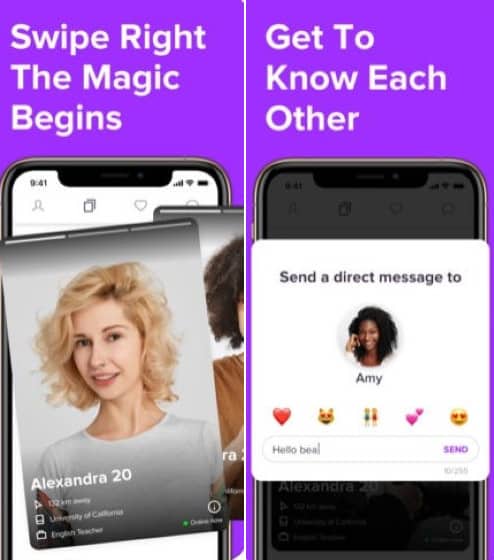 Its Zoe is Grindr for women. It’s a cutting-edge Dating & social networking application for lesbian, bisexual, and queer women worldwide. Zoe solves all those difficulties for women that Grindr solves for men. Also, Zoe focuses on meaningful relationships and not just random dates. When you join this platform, you have to go through a personality test used to find matches for you. Your games come with a match percentage. Well, The more you have in common, the higher is the percentage rate. Thus, the percentage score is an excellent way to know if you want to go on a date with a person or not. Whether you are lesbian, bisexual, or a queer woman looking for meaningful relationships, try Zoe. 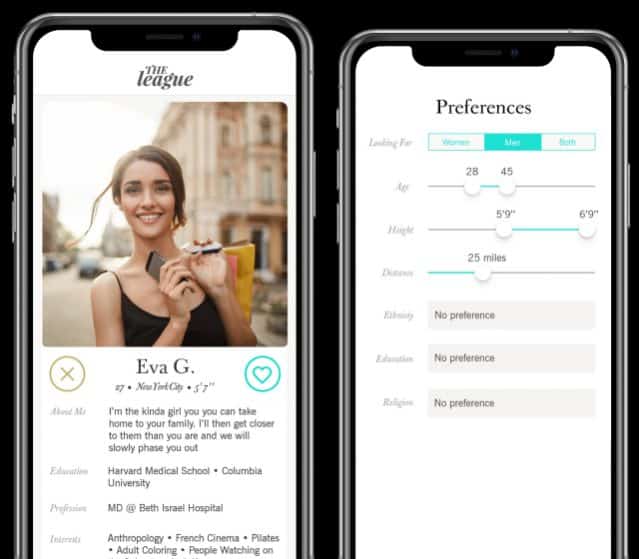 Since the name itself makes it crystal clear, “The League” is designed for the people who are not ready to settle for a mediocre professional life in the name of maintaining a relationship. Whether you want to meet successful people who respect your way-too-restrictive work schedule, this is the app you should use. As evident, the app comes with some exclusivity—the app vets people so that you don’t have to. You can also set up your criteria like education or job-stature that you are looking for in a date, and you will only find those suggestions that match your desire. This is the best dating application for professional apps for dating for people who don’t want to go through all the hassle and shenanigans that come with online Dating.

Strength to Your Dating Game with These Tinder Alternatives

How to Install Minecraft Forge Mod

Want to Become an Ethical Hacker? Here’s How

How to Fix SIM Not Provisioned Error (Easy...

Trading With Your Smartphone – The Key Considerations