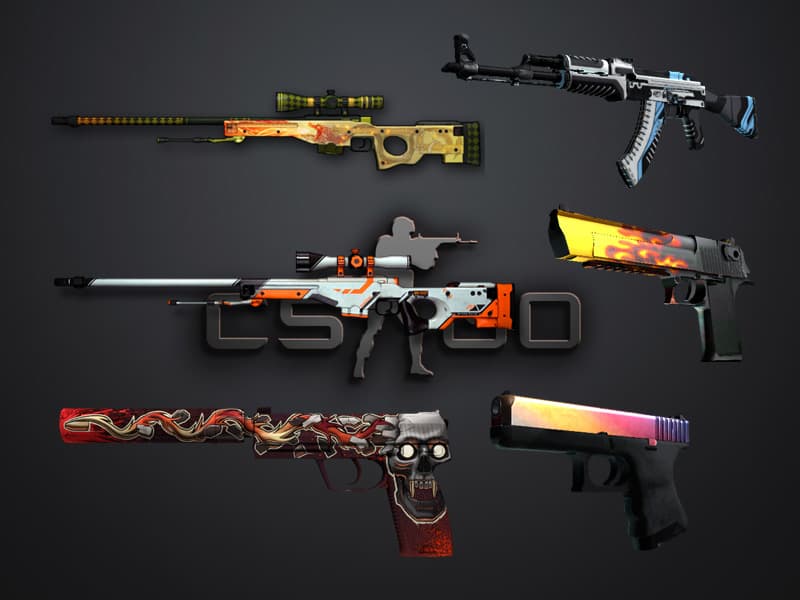 The world has gone digital in the era of globalization. Starting from education to marketing, everything has been made available in your palms by the digitization of market place through your electronic devices like the smartphone, laptop or tablet. The world of entertainment has also been taken under globalization. Previously it was confined to live streaming only through which we could see different games and tournaments held in other countries from our home. But now you can play several games also online and your partner may not be sitting near you to assist you. You will be together in the virtual world and your job will be accomplished. The CS: GO is a game that offers you facilities like that.

Table of Contents hide
What is CS: GO?
Equipment and Weapons to Support the Players
Checking the Worth of CS: GO Skin
What about Getting Real Money?

The full form of this game is Counter-Strike: Global Offensive and this is a video game where you are the shooter as the first person of the game. This game was developed by the Valve Corporation in association with Hidden Path Entertainment. This was released in the year 2012 and it is capable to run in Windows, Play Stations, and Xbox 360 and so on. This game is a bit different than the previous versions that it had. The models of weapon damage have been re-balanced. You have got several bullets that can get through walls as well as several objects to bring your enemies down. You have also got some updated versions of the radio commands.

Equipment and Weapons to Support the Players

As the game progresses, you will need several types of equipment to play and move forward in this game. It gives you 34 different types of equipment, 19 of which are exclusively designed for this version. You get different cheap CSGO knives, pistols, grenades, gears, SMGs, rifles and many more to fight against the enemies. The weapons are known as skins here and some of them are very expensive to buy. But you can get them free through several sites which allow you to earn reward cards and reward points to get these skins for free.

Checking the Worth of CS: GO Skin

Since the market is global now, the CS: GO skins are also traded in the market and you can get real money for them sometimes. The most important skill you need to trade in the market is to assess the skin values correctly before trade on them. The value of the skins is decided on three key factors of their characteristics.

The initial float of the skin is the attribute level of wear. It signifies the imagery of skin quality. The skins are mostly worn down at these five levels, “Factory New, Battle-Scarred, Well Worn, Mineral Wear and last but not the least Field-Tested”. Factory New is a skin that doesn’t leave any clue of its wearing. These five levels are assigned with float numbers as well.

Now the question is, what is the requirement of these float values? These values have a significant and considerable impact on skin value. The leaser value the skin is having, the higher its price will be. Based on this theory, the skins named Field Tested and Minimal Wear are cheaper than the other skins.

Another most important feature of the skins should be the rarity of it. The rare it is, the higher its price is. You can get the skins from the stashes which require money to open. But you never know whether your desired skin is there in the stash or not. So from this, you can imagine the worth of skin and all these factors are taken into consideration to assign the cost of the weapons.

The Counter-Strike: Global Offensive has s very important quality of it as its fairness. The winning of the player depends largely on the skill he poses. In addition, if you get skins having special features in this game, your game plan may be more accurate.

Many companies are there who sponsor some video game tournaments. In these tournaments, they give some special skins to the participants which are known as souvenir skins. These skins appear to the players as applied sets of weapons. The skin which is sold for maximum value was the AWP Dragon Lore in the tournament named Boston Major in 2018.

To sell the skins, you need to pick your market up. You have to find out such people who are willing to buy your skins and play the game. You can sell these skins in the official market run by Valve Corporation at high prices. There are other options too for the sellers. The private offers can bring you money if you get one from any of the players. You can directly close the deal with that person by talking to him. Another option for you is the third party market which is like the steam market but out of the jurisdiction of Valve Corporation. You can also opt for the third party mass deposit sites like the SkinWallet. These markets claim to give you the best price for your weapons.

What about Getting Real Money?

Viewing the opinions from many of the players, it is understandable that if you sell a skin in the stem, you will get money but not directly in your hand. It will get deposited in your steam wallet and you will be able to buy other games using them. But this is also not very different from winning real cash prizes. The game lovers are always keen to buy newer games for them and play with their heart and soul. Some of the gamers also think it to be more real to go for case keys which you have to buy against your pocket money. These amounts can also be transferred through different online apps like PayPal and others. In the virtual world, you should keep trust in the other party which is the most important part of this exchange.

Can You Trust Antivirus Companies?