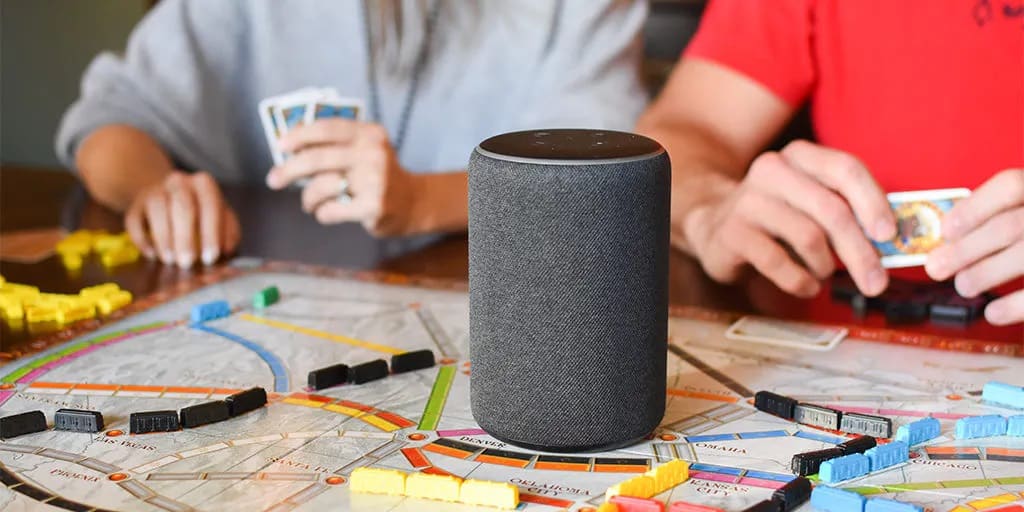 Alexa is the voice assistant from Amazon, is one of the top voice assistants out there in 2021. suppose you’re looking for ways to make the most of your Alexa-powered smart speakers, other than Alexa Echo skills, then we have compiled a list of the best Alexa Games you can play right now.

Now, You can play these Alexa Games from your Alexa-enabled intelligent speakers. In case if you don’t have one, you can install Amazon’s Alexa app from Apple’s App Store or Google Play Store to check them out.

As the name suggests, Escape the Room is an Alexa Game where you are stuck in a room, & your objective is to escape the Room. Here, You can use commands like look, inspect, and use to move around and know more about the Room you’re in. Now, there are different rooms like a jail cell, office, car, and garage in the game. You can also try this game out if you’re someone who’s patient and likes solving puzzles. So, To play, say ‘Alexa, open Escape the Room.’

At this time, we tend to run out of truth or dare prompts to ask our friends. Well, To help you out in those situations, you can use this Alexa Game. So, When you say ‘Alexa, play Truth or Dare,’ the game opens & asks you need to prompt a truth or a dare. Also, You can then use that prompt with other players in real life.

The Rock Paper Scissors Lizard Spock game brings the classic game’s experience to Alexa users. So, You can start the game with the command ‘Alexa, play Lizard Spock.’ Though there’s another Rock Paper Scissors game on Alexa, this one is more advanced, offers clear instructions throughout the game, & keeps you updated on what’s going on in the game. Suppose you are not familiar with the game, you can ask Alexa to explain the basics.

Name the Show is one of the perfect Alexa Games for those who spend a lot of time watching TV shows. In this game, you will be shown quotes from famous TV shows along with a few options. So, Your task is to guess which TV Show the selection is from. Well, To get started, say ‘Alexa, open Name the Show.’

Guess My Age is another Alexa Game where you guess Alexa’s age. Now, Alexa will offer hints to help you make accurate guesses. For example, if you think the number 25, Alexa will say if its age is older or younger than that. Well, Based on this information, you can narrow down the age limits and guess the right age. So, To play this game, you can utilize the command, ‘Alexa, open Guess My Age.’

Suppose you have ever played Akinator. You will already be aware that the game involves thinking of a character. This would be best if you answered questions, and Akinator will try to guess the character. As well, that’s precisely what you get with this Akinator Alexa Games. So, To try it out, you can say ‘Alexa, play Akinator.’

The True or False is a game where you can check your general knowledge. This game gives you a statement, and you should answer if it is true or false (obviously). Well, I like this game because it gives you context about the answer if you get it wrong. Now, You can play the game solo or with up to 20 people, making it the perfect game to play in family gatherings. So, The voice command ‘Alexa, play true or false’ starts the game.

This Cursed Painting is an interactive audio roleplaying game where you play as an adventurer, a thief, a noble to uncover secrets of a cursed painting and stop an undead plague. This game has a rich plot, and if you’re someone who loves RPG, you won’t be disappointed. Now, You can play the game with the command ‘Alexa, open Cursed Painting.’

So, In Twenty Questions, Alexa asks you questions in an attempt to guess the animal, vegetable, or mineral you have in mind. Here, You can respond with yes, no, unknown, sometimes, irrelevant, probably, or doubtful. You have the option to skip a question using the command ‘I don’t know.’ ‘Alexa, play Twenty Questions’ starts the game.

Well, Would You Rather is a casual game where you are given two scenarios. From these scenarios, you are supposed to choose the one that you’re more likely to do. So, After choosing one of the situations, the game will say how many players agree with you. Well, unlike most of the other games here, there’s no end goal to this game. This is something you can play when you’re bored. Now, You can check this game out with the command ‘Alexa, and play Would You Rather.’

Thus, those are the best Alexa Games you can check out in 2021. Though the collection of games isn’t as diverse as Google Assistant games, Alexa has a few tips and tricks up its sleeve to keep you entertained when you’re bored. Which of these Alexa Games do you like the most? Let us know in the comments.

Purchasing Games vs Subscription Based Games-Which Option is...

Lightest Emulator to Play A3: Still Alive on...