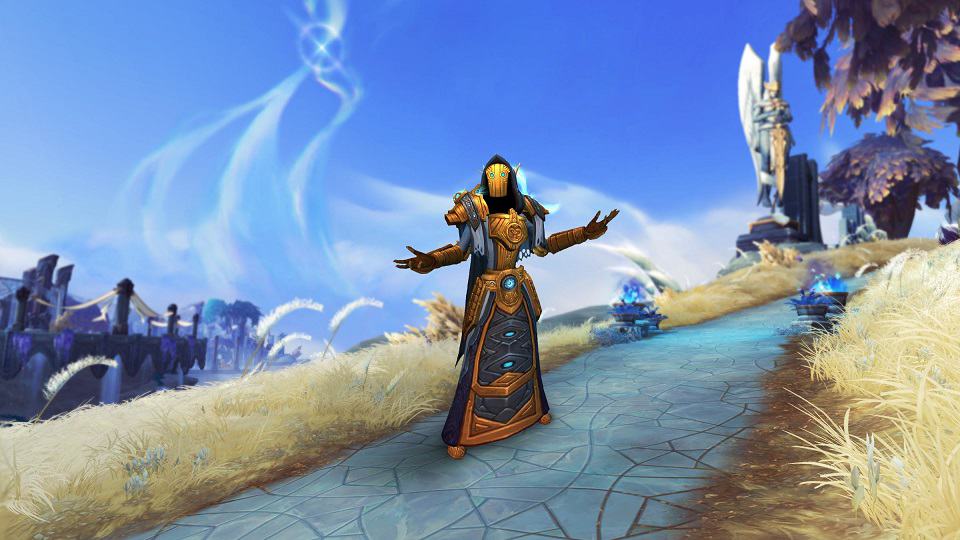 Whilst fans are eagerly awaiting the release of Shadowlands, and even though we are awaiting the arrival of the expansion by getting more World of Warcraft items to fill the void, we can also get our hands on some features early before release. There are editions of the World of Warcraft expansion that can give you some extra items to enjoy, and in this case, we have the Vestments of the Eternal Traveler transmog set to get our hands-on.

What is the New World of Warcraft Transmog Set?

The Vestments of the Eternal Traveler transmog set is something that was intended to give fans the opportunity to celebrate what has been building up to the new expansion. This set is there to be unlocked by unlocking a quest and to start collecting items to get yourself the set. After doing so, you would then be able to wear the new outfit with the eligible characters that you have. What’s more, you won’t even need to have pre-ordered Shadowlands to get it.

How to Get the World of Warcraft Transmog Set

So, if you want to get your hands on this set, then you will need to finish The Eternal Traveler quest, which is presented to you by Xolartios. Before you can do this, you need to go to the Ensorcelled Everwyrm and find the Guiding Orb on the back. If you have purchased the Heroic or Epic edition of the upcoming Shadowlands release, then you will receive the Ensorcelled Everwyrm as a WoW mount reward. If you haven’t then don’t panic, as you are not required to have pre-ordered the game to get the quest itself.

You will however need to find somebody who has pre-ordered one of the mentioned editions and request that they mount up near your location. Then you simply have to interact with their mount and get the quest. Another way to get the quest is to find a player who is already on the quest to share it with you. Whichever method you decide, they are both pretty easy ways for you to take part.

Regardless of the method you choose, you will then need to find a random drop from mobs in Zandalar or Kul TIras known as Echoes of Mortality, of which you will need 40. This can take you a couple of hours because of its low drop rate compared to other WoW items. After you have done so, you will have completed the quest and the World of Warcraft transmog set will now be available to you.

So whatever technique you may have used to get this set, it makes a change from grinding WoW Classic gold, and instead of treating yourself to a brand new World of Warcraft transmog set in anticipation for the release of Shadowlands, which we shouldn’t have to wait too much longer for.

Have you managed to find this World of Warcraft Transmog Set? Let us know in the comments section below!