Pipe Bending: How To Fabricate The Perfect Bend 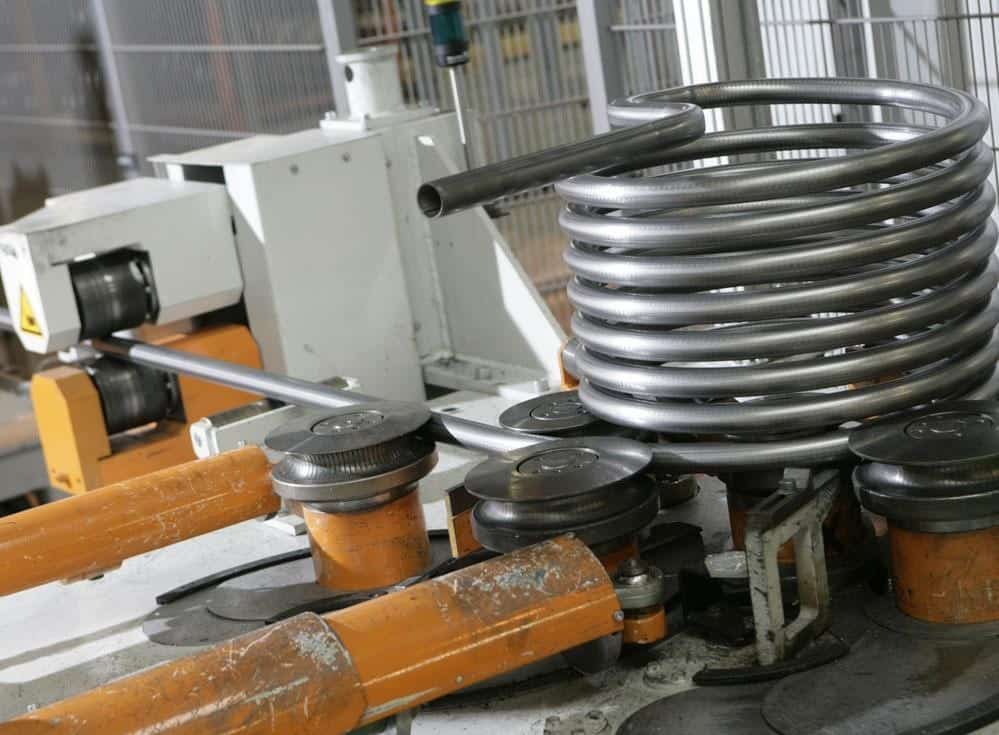 By definition, pipe bending, or tube bending, is one of the fundamental machining processes in the metalworking industry. Pipe bending is any metal forming process used to form pipes or tubes permanently, and the process can be either a form-bound or freeform-bending procedure.

Many industry professionals call pipe bending a black art, a somewhat mysterious process with unpreventable trial and error. Yet in reality, the primary principles of pipe bending have remained the same for decades. And even though modern-day technology and machines used for bending pipes and profiles have evolved tremendously, all of that mechanical magic can’t alter physics.

Notwithstanding, if you’re working on bending pipes or tubes, and regardless of the bending method you have in mind, fabricating the perfect bend comes down to just a few essential factors: the pipe bending technique, tooling, lubrication, and machinery.

Pipe bending begins by knowing the exact properties of the pipe you’re working with. Pipes are usually utilized to transport fluids or air and are generally specified by their nominal pipe size. Still, when you’re setting a pipe bending machine, the centerline radius, the outside diameter, and the pipe’s wall thickness are the three critical variables.

Every pipe comes with nominal wall thickness with a precise tolerance, as the wall thickness can vary slightly during the bending process. The variation should always be accounted for, specifically for bending procedures that utilize specific and tight-fitting tooling on small bending radii. Other bending variables involve the inside bend radius, the outside bend radius, and the centerline radius where neither stretching nor compression can occur.

Even though some pipes are seamless, most pipes nowadays are manufactured with a longitudinal weld. In pipe bending, the quality, size, and consistency of the weld do matter a lot.

As with any other fabrication method in the metalworking industry, the application requirements drive the fabrication method of choice. In any case, most pipes are bent with one of the four most popular techniques: roll bending, ram-type bending, compression bending, and rotary draw bending.

Photo from The Fabricator

Typically used for massive workpieces in construction, roll bending generally involves three rolls positioned in a pyramid, oriented vertically or horizontally. Depending on the machine, the rolls move and produce specific and usually enormous radii.

Another roll bending machine type is the two-roll, pinch-style roll bender where the pipe feeds between an upper and lower roll, while on either side, two adjustable guides move to produce the desired bend angle.

Roll bending generates cross-sections that are relatively uniform with only the slightest deformation, and it’s usually used for crafting drum rolls, truss pipes, appliance frames, and other rounded and large-diameter components.

Ram-type bending is one of the oldest and simplest pipe bending techniques. It uses a hydraulically driven ram that forces the tube against pivot blocks or rollers that bend the material. The process is repeated on multiple locations of the pipe until the desired radius is achieved.

This pipe bending technique is by far the least expensive way to bend pipes, but it’s not as controllable as other techniques. If the application has tight bending tolerances, the ram-type bending approach may not be the best choice.

Compression bending uses a compression die or a roller to bend the pipe around a stationary bend die. The machine clamps the workpiece behind the rear tangent point while the roller effectively compresses the pipe against the central bend die.

Compression bending is quite common in pieces that need symmetrical bends on either side, and this technique works well for tubes bent to a centerline radius that’s at least three times the pipe’s outside diameter. This technique is mostly used to produce commercial and household products like towel bars, for example. 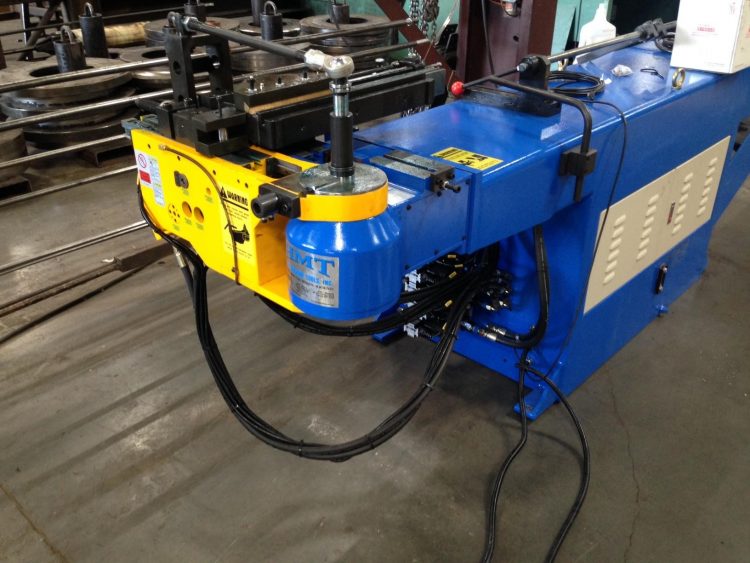 Rotary draw bending is a technique that involves clamping the outer part of the pipe and bending it over a die with the exact radius as the desired pipe radius. This bending technique is heavily utilized for bending applications that require a tighter radius, sometimes down to a centerline radius that’s only 0.7 times the pipe outside diameter.

Rotary draw bending gives you maximum control over the wall thinning and ovality. It supports the flow of the material during bending using a mandrel in the pipe inside diameter and precision tooling on the outside.

In order to achieve the perfect bend, you’ll need an a-class tooling setup, mostly if you use the rotary draw bending technique. For instance, the mandrel’s hardness matters because if you have a hard tube and a rigid mandrel, the mandrel will tend to adhere inside the tube and damage the process.

A mandrel with articulating balls fits barely within the pipe’s inside diameter. The clearance between the mandrel shank and the tube’s inside diameter is usually about 0.009 inches. As the clearance between the articulating balls and the tube’s diameter might be a little more massive, it would cause significant friction without the appropriate lubrication.

In recent years, nonpetroleum-based synthetic lubricants are becoming more popular. They often come in the form of a paste or a gel and can be diluted to whatever consistency the application requires. In general, heavier-duty bending pipes with thick walls and tight radii require full lubrication, while a thin film is enough for many other bending applications.

Axes in pipe-bending machines work with stalled axes, meaning that each axis stops momentarily before moving on to the next. In a complex application, the pipe may be moved forward for the first bend, the mandrel moved into position and clamped, and then bent. 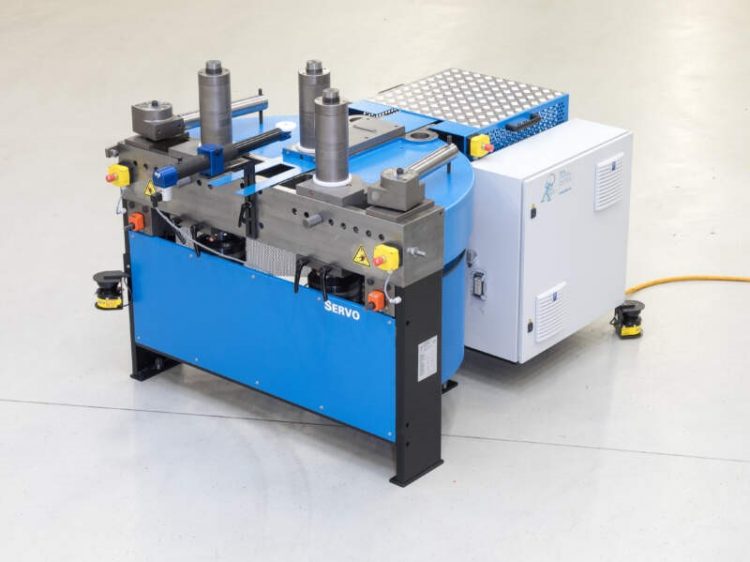 Even more, newer machines have space for tooling to combine the bending process if you have a pipe with several tight-radius bends and one large-radius bend. Constructing a bend die that large for rotary draw bending wouldn’t be very practical, so that’s why some machines offer roll bending altogether with rotary draw bending in one unit.

Machinery standards and requirements hinge on different factors, like material grade, wall thickness, workpieces, and the centerline radius that you want to achieve. Make sure to consult with a bending engineer before you decide which type of pipe bending machine you need for your purpose.

Modern bending machines’ proficiency, combined with the latest controls and software, shows how accurate and precise pipe bending has become in recent times. With the right material, tooling, technique, lubrication, and machinery, you have a much better chance of fabricating the perfect bend all the time.

How to Grow Your Business with Loyalty Schemes

Why there’s still a place for QR codes...