What is VulkanRT (Runtime Libraries) – Things You Need to Know

Let’s discuss what VulkanRT is (Vulkan Runtime Libraries) plus if it is a good idea to uninstall from your PC. This app, as they say, is installed on their PCs without their permission. Therefore, the users have a double state of mind about this app being spyware of some sorts which can cause problems to the PCs. Hence, we are going to tell you about What is Vulkan Runtime Libraries, is it a malware app and should you worry about it being present on your PC?

Table of Contents hide
What is VulkanRT?
Purpose and Use:
How to Locate VulkanRT Program on Your PC?
1. Check via Control Panel:
2. Check for the Application Inside Settings Application:
Should You Uninstall VulkanRT?
How to Reinstall Vulkan Runtime Libraries after Uninstalling?
Advantages/Benefits of VulkanRT
Disadvantages of VulkanRT
Final Words :

Note that: this app is automatically installed on the computer whenever the graphics or video drivers are updated. Here, it’s installation is done by display card manufacturers such as NVIDIA, Intel or AMD present on our PCs.

Suppose you are wondering about its practical usage and its importance on your computers, Note this: the Vulkan Runtime Libraries/VulkanRT works to lower the overhead in terms of performance & gives users direct control over the GPU.

Plus, it helps in lowering the CPU usage on the PCs during heavy performance-inducing tasks so that the performance cores don’t max out, so which could result in shut-down of the computer. Presently, some of you might also be thinking that it is a useless app and you might want to uninstall this then ‘redundant’ file from your computer, but you should not uninstall it as we have already explained its importance.

Forthwith, this package is included with the Nvidia drivers so you might not notice about how and where the installation took place. Some VulkanRT is needed for playing graphic-intensive games & other things which include graphics cards such as Video Editing.

As well we were talking more about it, termed as a 3D Graphics API whereas Vulkan is a graphics standard related to OpenGL or DirectX. The VulkanRT is present on our computer for Gaming, and the primary purpose of it is to enhance 3D performance in Gaming.

How to Locate VulkanRT Program on Your PC?

Firstly, you might want to check whether the app is installed on your computer or not. For that, you can check its presence on your PC via two methods –

You can check the installation on your PC running Windows 10 by only going to the Settings application (Windows + x). Firstly, click on Apps & Features inside Windows 10 Setting application plus search for the ‘Vulkan Runtime Libraries’ in the list of installed apps as follows. 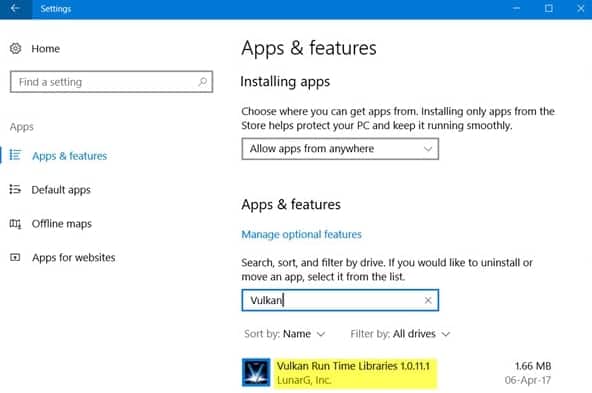 The quick answer is NO!

Most of you might have a question about what will happen if you uninstall it. Well, Keep in mind that you will not notice about the uninstallation of this application from your computer as it is not a core file needed for the functioning of Windows. Though, please take note that you may notice the uninstallation of Vulkan Runtime Libraries while playing Games as it is necessary for 3D performance in Gaming.

For instance, some of the games like Dota 2, Star Citizen, Talos Principle, CryEngine, and Unity along with Steam games, require Vulkan RT Thus. If you’re playing any of these games, then it’s not advised to uninstall this app for your benefit.

How to Reinstall Vulkan Runtime Libraries after Uninstalling?

If you want to install it again, you will have to reinstall the graphics drivers on your PC which will install the Vulkan Runtime Libraries on your computer once again.

Lastly, we hope that you would have known everything about this app which is the sole purpose of this article. Plus, we will reiterate that this application is not malware, and it is safe to keep it as it is on your computer.

Notable, you cannot download Vulkan Runtime Libraries separately once uninstalled so you should keep in mind that some of the games on your PC might not run same as before after its removal. Aside from that, if you have any other concerns regarding any of the points Discussed above the Vulkan Runtime Libraries then do not pause to comment in the comments box.

7 Most Amusing iPhone Apps You (Probably) Don’t Know About

10 Tricks You Should Learn to Speed Up...