Ever had this problem? You use a VPN to unblock Netflix, but when you get to the login screen, you can’t proceed. You type in the right email/phone number and password, but Netflix keeps saying they’re wrong. You double and triple-check it’s the correct information, but with no luck.

What’s going on? Did you suddenly develop amnesia or are you going crazy and you never had a Netflix account to being with?

Don’t worry – it’s nothing that extreme. It’s actually a pretty rare issue that some VPN users might experience. This happened to us a few times. We suspect it’s Netflix’s way of blocking your VPN because it detected it, but we can’t say for sure.

Anyway, that’s not what you’re interested right now. You want to fix this problem, and we’ll help you out. Here’s a list of things you can try:

1. First, Make Sure You Actually Have a Good Netflix VPN

If you were thinking that all VPNs unblock Netflix, we have bad news for you. Netflix is actually really (and we do mean really) good at detecting and blocking VPN services. If you use a VPN that’s not well optimized for Netflix, you’ll see the Netflix proxy error very often – sometimes even while you’re in the middle of an episode or movie!

So, it’s not far-fetched to think that if Netflix detects your VPN, it will prevent you from logging into your account.

To rule that out, you should make sure you’re using a good Netflix VPN. Click here to use StreamCatcher to find out which services can unblock which titles. For example, if you want to unblock A Clockwork Orange, you should use a US server from PrivateVPN or NordVPN. 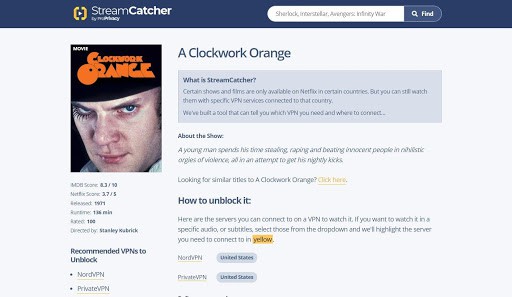 ProPrivacy developed StreamCatcher, and they’re a popular VPN review site. They test VPN round-the-clock to make sure they work with Netflix. So the VPNs you see recommended by StreamCatcher definitely work.

At least that was the case for us. In all our tests, we never encountered the login issue while using NordVPN and PrivateVPN.

2. Refresh the Page or Reboot Your Device

The easiest fix for us was refreshing the page we were on. It didn’t always work from the start, but after three or four page refreshes we were finally able to log in.

If that doesn’t work, however, you can try restarting your device. It didn’t work for us, but other people on Reddit told us this method helped them.

3. Use a Different Browser (Also Use Incognito/Private Mode)

When we discussed this issue with different support reps from various VPNs, they told us we should try using a different web browser. Using incognito/private mode is also a good idea (no tracking cookies that way, so no way for your browser to leak your geo-location to Netflix).

We tested this solution and can confirm it works. We didn’t have to use incognito/private mode, but that doesn’t mean you shouldn’t try it.

Some VPN users on Reddit told us that the issue was with the Netflix app for Windows 10. Apparently, it glitched out and wouldn’t let them log in while using a VPN.

The solution was to delete and reinstall the app. Others said that switching to the web browser fixed this problem for them.

Sometimes, you might be using your ISP’s DNS servers even though you’re connected to a VPN (so, your geo-location will leak). Check your network adapter’s settings to see if the DNS address is set to automatic or not. If it is, that likely means you’re not using the VPN’s DNS addresses.

Most VPNs tell you what their DNS addresses are in FAQ articles. But you can also ask their support reps.

To perform a DNS leak test, use this tool. Run the Extended Test while connected to the VPN. When it’s done, the results should only show servers from the country the server is in. If there are other locations, you’re dealing with a DNS leak.

If that’s the case, you should make sure the DNS leak protection feature is enabled in your VPN. Also, contact the provider’s support team to see what other measures you need to take.

Oh, and if you’re using Windows 10, be sure to disable the following features:

They can actually force your device to use your ISP’s DNS even if the VPN has DNS leak protection enabled.

Like we said at the beginning, we didn’t have this issue with NordVPN. But we asked their support reps about this anyway to be sure.

According to them, if you do experience something like this, you should disable the CyberSec feature. It’s NordVPN’s ad blocker, which also blocks connections to malicious domains. We don’t know how it could interfere with Netflix, but who knows – it’s worth trying this to see if it works. If it does, please let us know in the comments.

If all else fails, you can always just reset your password. It’s a bit of a hassle, but it works. At least it did for us.

We tried this five times, and were able to bypass the login issue without having to disconnect from the VPN.

Anyone Else Encountered This Problem?

If you also experienced it, please let us know what you did to solve it. Also, if you know what causes it, we’d really love to hear about it.